Sunday morning last saw me – up ‘n’ at ’em bright and early for the trip from Galway back into the depths of Wicklow to the Blessington Lakes specifically for the Moxie Adventure Race. I was registered for the Moxie Pro so there was a 60km course of run / bike / run / kayak / bike waiting for me.

I arrived early. I set out early! So being one of the first there I got parked up and greeted the day at my leisure. Transition was still being set up and I paid a visit to the Sports Foods Ireland stand to negotiate a ‘breakfast’ of a ClifBar (Macadamia Nut & White Chocolate – YUM!!) before setting up my bike in transition.

Makes a change from the norm setting up the road bike in transition, haven’t done that in a while! Possibly the last time I set this particular bike up with pedal cages (instead of clip in pedals) in a transition was at the Phoenix Park Duathlon series back in 2007!! 🙂 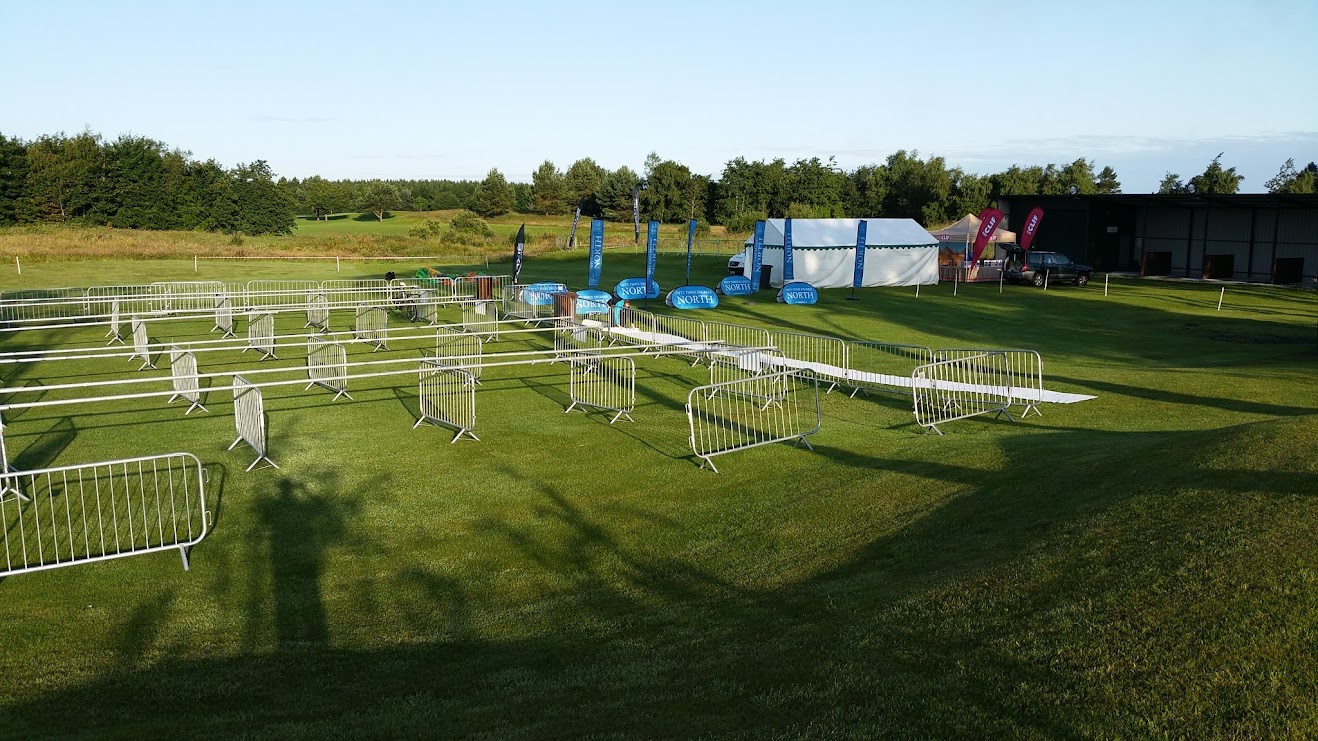 I chilled out in the van for a while before getting changed into my gear; trishorts, base layer top, Ronhill Trail Tee, my trusty WTC gilet & Outfront Events buff. In my waist pack was the mandatory rain jacket, first aid and nutrition (more about that in a few). Back over to hang around transition to hear a race briefing and we were sent into a corral for the start.

Over head was the buzzing sound of a camera drone (see video below) and spotting the familiar face of old club mate Debs, a quick greeting and then the countdown to the start. 5, 4, 3, 2…1 GO!!

This wasn’t 1k really, it was a lap around the driving range to break everyone up a little before letting us loose in transition and on the roads. I think in the official results it is lumped in as part of Stage 2. Nothing spectacular, grass run, lumpy over the mounds, back into transition and a queue to dip at the CP.

Grabbing the bike and exiting transition, a few cars parked on the road meant we had to weave around, though with people stopping to mount just at the line I ran through (triathlon style) and jumped on the bike a few metres clear of the blockage. Getting the feet in the cages was a pain though! Took a bit of work to jiggle the straps around to hold the trail shoes in place, at which stage I was out the gate and looping around the lakes.

The route is grand, quiet roads, nothing serious in terms of climbing but still preserving the legs for the mountain run and second bike leg. Arriving into TA2 with the expectation (in my own head) that we were straight into kayaks I was surprised to be directed out the gate and onto the run.

Straight out the gate and right up a track that wound its way up, cross-contour and parallel to a steam in full flow thanks to the rain on Saturday night. The ground was saturated and I immediately experienced flashbacks to the horror of the Rogaine bogs!!

I just tried to stay steady on the uphills. The legs felt tired so I wasn’t really running, more power hiking, a little jog and hike again. I was passed by some fast moving bodies as we turned left to rise up to a plateau area (2.5k in). I caught up to a couple by using gravity to pull me along the false flat:)

Then gravity bit back as I went head over heels through a bog hole. Turning a stumble into a Ninja roll is not so easy in a bog but I was quickly back on my feet and turning right, hit the steeper section which climbed up to the first peak. Again several passee’s came by me again but I was set for the next downhill and scampered down past them, comfortable on the rocky surface underfoot.

Running along the saddle a guy came up alongside me and we were passed by a flyer. I got chatting with the guy about the kayak stage, blah, blah blah and sure enough my foot caught a lip and over I was going. I picked my landing spot and ground to a rough bump in the granite gravel, smacking my elbow and hip but missing the many rocks. I told yer man I was grand and dusted myself off.

No time to ease up or everything would stiffen up. I continued running waving my arms like a loon to stop the elbow locking up and went onto the next climb. After 7.2k it was all downhill and fast!! Once we got back onto the road it was like my legs were free. I ticked along nicely right up until the moment some sadistic RD routed us onto a sandy, gravelly beach for 2k to get to the kayaks!!! 😉

I’d have preferred to run another loop of that mountain!!!

Off the beach and running through a short section of woods I turned to see who was with me. Recognising a familiar face from Achill ROAR (funnily enough also running along a beach there) we chatted briefly before agreeing to kayak together. Introducing ourselves, we agreed that Lorraine went in the front, I obviously in the back.

This was to be 5k but was shortened on account of a swell / wind or something. That annoyed me as this is definitely my stronger leg. Anyway we donned PFD’s, grabbed paddles pushed off and very quickly struck a good rhythm and started closing down singles and other double on the way out against the waves.

Kayaking is fairly straight forward. Paddle, paddle, steer. Coming to the turn we passed x3 singles very quickly as they struggled with the direction, a short loop around two buoys and we were pointed back to start. It felt like we weren’t moving but that was due to us being on the waves.

Cranking the paddling up our speed went from an average 5.5km/ph to 7.6km/hr on the return leg (with the swell) and we beached shortly with a good position gain. Dropping the boat & paddles I got stuck briefly in the PFD before freeing myself and running up to the field of bikes.

The run to the bikes was horrid, hip was stiff from the fall and sitting but I got there.

Jumping on it was time to spin the legs back up and strap the feet in again. My two calves went immediately into spasm, cramping really hard. I spent the next few km drinking and stretching my legs. I was starting to suffer on this second leg and my effort went up but just no power in the legs. I’d only taken 2 gels with me and a bottle of Accelerade so it was a bit of bonk, especially as this was hard racing (relative to everything else for this year).

I tried to chase down the cyclists in front which at least made me keep the effort up but on the rise I was falling back only to have to make it back on the flat. Pretty uneventful cycle until we had to stop in Blessington to dip at a control. I could not get my foot out of the strap which had separated from the pedal.

Oh dear! Here we go I thought, over like a shot deer in the middle of the street. Just like a newbie 🙁

At the last second my foot pulled free, but as my weight came on OH SWEET BABY JEBUS WEPT!!! my left calf cramped like a MOFO!!

I dibbed and screamed as I peddled away. 4 or 5 people came by me here, but they must have been Moxie Juniors (MTB) and I caught them again as I got spinning again.

All about getting back home from here. I caught up with Lorraine only to fall away on the last climb and finished strongly to the dismount line. Running into transition, I passed another 2 people before racking the bike and ‘dashing’ for the line.

All in all a great event. I’m not trained for speed this year so Paul Mahon’s predictions in the Race Form were ‘slightly’ off but I was happy with overall 12th in the over 40 category.

Great day out and highly recommended. Definitely back for next years races. Next up is an appointment to meet the Beast of Ballyhoura!!!