So following on from our paddle, trek, paddle arrival into Killary Harbour and the subsequent trek along the famine road to Delphi Adventure Centre, it’s just after 1:30 am on Thursday morning when we reach our first transition. Carrying on with Kate’s telling of the story…

I can’t wait to get a hot meal and some dry clothes on and we all need to tend to our feet before the next trek.

We have two special boxes in our team bag – one labelled FOOT CARE, the other BUTT CARE. Unfortunately we’ve made a bit of a boo boo because we didn’t realise that we wouldn’t have access to our team bag at this transition, only our personal bags so no hot meal and no foot care. After I get some dry clothes on, I make us coffee and we scrounge around in our personal bags for food. Luckily I have some baby wipes and powder that we can use on our feet because there was a lot of sand in our shoes during the last stage and it’s very hard to get rid of it on the go and I think it’s already done some damage to our feet.

We leave transition within the hour and set out on the next trek with our head torches on. Originally there were 5 checkpoints on this stage with 3 in the Bens and 2 in the Turks. We thought we could get CP1 in the Bens and CP4 and 5 in the Turks but with the sea paddle having taken all the teams such a longer time than anticipated, a decision was made by the RD to scrap CP5. Our plan now was to get CP 1 and then make a decision on whether to go for CP4 or simply follow the road back to Maam for the next transition.

We had to walk for a few kilometres on the road to get to the foot of the Bens and it was here we made our first nav mistake when we missed the right turn off the main road. We’d only gone about 500m when Mike realised the mistake so it wasn’t too costly. We followed the road up past a large lake and we were on the lookout for a left turn where the large lake joins a smaller lake. It took us a while to find this because we turned too soon and ended up on an island and that lead to a bit of confusion about which was the large lake and which was the small lake!

There was a little bit of head butting over which was which with Sean thoroughly confused by the lakes that continually switched sides!!

I think the tiredness was starting to affect us now as we’d been on the go for nearly 24 hours at this stage. Anyway soon after this we got back on the right track and we were soon starting the steep ascent up the Bens.

The climb up was slow and difficult and it was here that I was very thankful for my walking poles as they made life a lot easier. There are no paths to speak off and the terrain is rocky and rugged. The nav was difficult as there was a thick mist which got thicker the further up we went and visibility was reduced to a couple of feet. It took us a long time to find the CP because of this and it was only thanks to some smart nav from Mike that put Sean on the right course to find the CP that we managed it. I think it took us the bones of 6 hours to do it though. Once we had dibbed, we set about on the descent to the road back to Maam. We had decided that we wouldn’t have time to head up into the Turks. Mike’s collarbone was sore and all of the lads had sore feet.

The road back to Maam was long. We were passed by the Japanese team Fujin Rajin at one stage. Mike speaks Japanese and we bumped into them a good few times along the course and they were always delighted to see us. They were flying along at that stage so we weren’t sure if they were short course or long course. 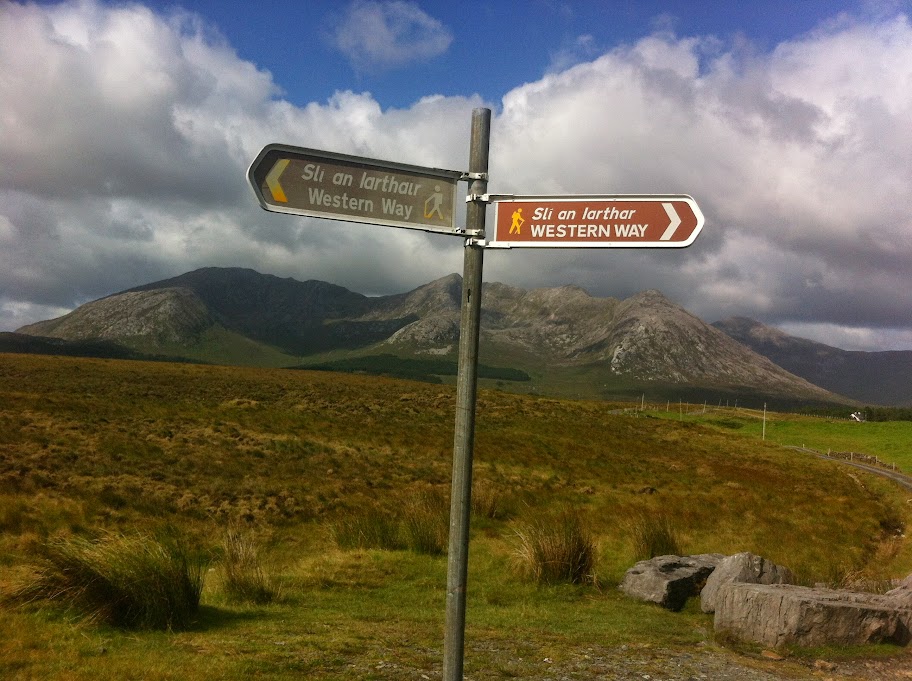 We were also passed by Godzone, the pre-race favourites. They didn’t look completely happy and they told us as they passed that they were having a bad race. We later found out that one of their team was suffering from a viral infection and it had been touch and go as to whether he would be able to race or not.

Somewhere along here we met Bryan from team ARSE. It was very confusing as he was wearing a marshals jacket and trying to explain to us that the path we were taking lead to a steep drop and we needed to go a different way. I wasn’t sure if I was hallucinating or not but then he came up and told us what had happened to Sinead and guided us back to the road. Frank was also there and he gave Sean some Vaseline or chamois cream I think.

Sean – it was strange as we were looking for a way out of the Rhododendrons onto the road and at one stage I said “lad’s there’s Bryan from ARSE!” Of course Bryan being the comic that he is came running up the field claiming to be Bryan’s twin brother. We then got the rather depressing lowdown on the accident that had befallen them and Sinead.

The vaseline was gratefully received as I was suffering from the lack of our BUTT CARE box.

Back to Kate –
We were a couple of kilometres from transition when we had our first bust up. I wanted to jog the downhills. Mike was on a go slow mode and there was a bit of a clash of personalities resulting in me storming off into transition at Maam followed at a safe distance by the boys!